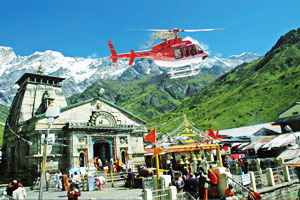 After the snow clears at the foothills of the Himalayas in late April, Hindu pilgrims start flocking to the four ancient temples known as Char Dham. Located high up in the Garhwal region of Uttarakhand, these temples mark the spiritual source of four holy rivers: the Yamuna (at Yamunotri), the Ganges (at Gangotri), the Mandakini (at Kedarnath), and the Alaknanda (at Badrinath). Hindus consider visiting the Char Dham to be very auspicious. Not only is it believed to wash away all sins, it will also ensure release from the cycle of birth and death. There are a number of options for going on a Char Dham yatra (journey).”